GRINT AND RADCLIFFE ORIGINALS UP FOR AUCTION! 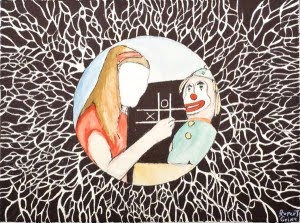 some HOW TO SUCCEED and Daniel Radcliffe signed stuff is up for grabs at auction,according to Mugglenet.
"Included in the [Theatrical Gems] auction are posters signed by Tony award winners such as .. John Larroquette, as well as other Broadway performers such as ..Daniel Radcliffe (How to Succeed in Business Without Really Trying)."

Also up for auction, in a different auction, is a original painting by Rupert Grint,as seen left. Head to the original story at Rupert Grint US here for full details.
Posted by Admin, Niamh, Danaholics Anonymous at 10:34 PM