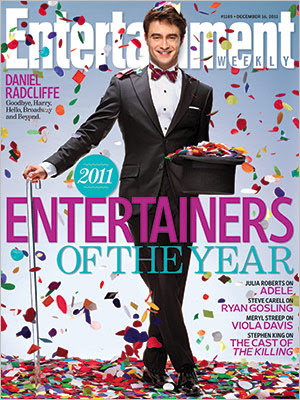 Entertainment Weekly have named their entertainer of the year as none other than Daniel Radcliffe. The Woman in Black US twitter broke the story,and included a link to Dan's snazzy EW cover (left). Sorry bout the size...not that you'd be complaining...think it suited the event!
Dan also gave and interview recently where he spoke about writing,in particular his poetry and a screenplay he's been working on.There are some quotes below given by Magical that broke the story here,but not before Woman in Black UK twitter. There is also the video from MTV.

“I am trying to write a script which is fun and frustrating and terrible at the moment but hopefully will be good at some point,” Radcliffe shared with MTV News. When asked what genre the movie would be in, Radcliffe didn’t have much to say. “Arthouse,” he said with a laugh. “Beyond that, I don’t know. It will be a film that no one wants to see.”

“I actually wrote a poem the other day for the first time in about eight months and I went, ah, actually that’s half decent. Everything else I’ve written has been crap, but I wrote something the other day I was actually pleased with,” he said.