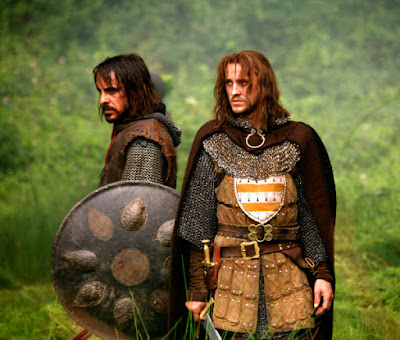 Tom Felton updated his twitter the other day to send us a new picture from his just wrapped tv show Labyrinth. You can now see this to the left.
In other cast sightings, Rupert was spotted at YOO MOO the other day. Their twitpic posted a photo here.
On that note, Rupert Grint US have reported, "Rupert Grint's Painting donated to @PrincesTrust has been sold 500£.Great.It was estimated at 1500-200£.Sold twice its price."
Ralph Fiennes was also out and about doing Bafta's interview where he spoke about Voldemort and his time on Potter saying;
"I loved the look of him...He's used quite sparingly because he is 'high definition evil'."

In very positive news, Snitchseeker were the first to report that Deathly Hallows part 2 has been longlisted for the Oscar for the Achievement in Visual Effects category.

it has also been acknowledged by the AFI;
"AFI also gave the "Harry Potter" franchise special awards, recognition that is given to films that don't meet AFI's criteria, most notably that a production must be primarily American- generated."

Finally, Pottermore has announced that it is back online after its week of changes to things like notifications. the full report can be found here.
Posted by Admin, Niamh, Danaholics Anonymous at 1:10 PM