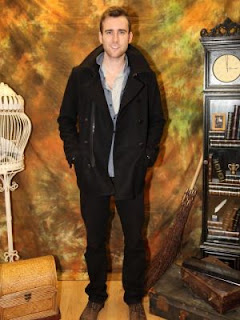 The cast of Harry Potter have always been charitable, but this week alot about the cast and charity has come up in news.
Left, is Matthew Lewis taking part in Children in Need at one of the fundraising centres.

Magical Menagerie have announced that David Bradley, aka Argus Filch is to attend 2 upcoming events for charity;

"[he] will open the Save the Children event at the town hall on Saturday November 26 at 10am, to which admission is free."

"Mr Bradley will also be opening a Victorian-style Christmas event in Kineton next Friday. Kineton will come under a Victorian spell for the evening, when there will be mulled wine and mince pies, hot chestnuts, traditional live music from Silver Bough, carol singing, a host of stalls selling Christmas gifts and many other attractions. The opening will take place at the war memorial at 6pm and the event will run until 8pm." 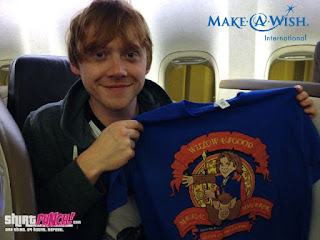 They also brought the news that the phelps will be taking part in a christmas project called Help Harry Help Others. Check out more info here.
In the last of charity news, Rupert Grint helped Warwick Davis promote his 24 hours only tshirt design for Make a Wish. The picture Warwick posted is left while you can purchase one here.

FINALLLY...
Some of the potter stars will be attending a special DVD/BLURAY RELEASE event at Harrods in London. Mugglenet posted the story that;

"On December 1st from 5:30 p.m., fans will get the chance to meet some of the stars of the Harry Potter film series as they make a special appearance at The Harry Potter Shop at Harrods (adjacent to the nearby hmv concession).

The actors including Warwick Davis (Professor Flitwick and Griphook), James and Oliver Phelps (Fred and George Weasley) and Jessie Cave (Lavender Brown) will all be on hand to meet and greet fans."

For further details,check out Mugglenet!
Posted by Admin, Niamh, Danaholics Anonymous at 9:24 PM