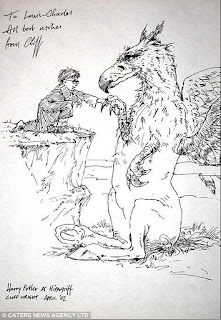 SNITCHSEEKER were saying Harry Birthday to a few people today, including Christian Coulson (who portrayed Tom Riddle in COS) AND Minerva McGonagal.

They also posted a video released of Emma's Elle Magazine shoot which can be viewed below;

Radio Times posted the same news as I heard on the radio on the way home this evening; that Ralph Fiennes, the deliciously scary actor who portrays Voldemort from Goblet of Fire onwards, is to receive the high honour of The BFI Fellowship. To you and me that stands for British Film Institute.

Mugglenet (and others) also had the Cliff Wright Illustration that will go up for auction. Wright was a UK Illustrator for the Potter series, and the sketch (seen left) is of Harry with a hippogriff.

THATS ALL FOLKS!!! Trademark of wb and all that jazz...
Posted by Admin, Niamh, Danaholics Anonymous at 10:39 PM