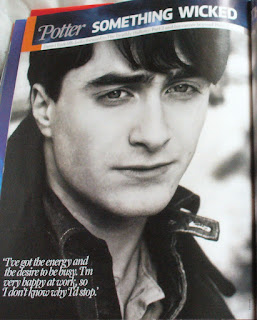 TOTAL FILM's July Issue has a 16 page (pull out if you could get it out without it ripping) special on the previous 7 films and what to expect in the final installment. It includes a new interview with Dan in which he talks about not working with Gambon anymore, how he thinks his performance in Half-Blood Prince is something he "hated" and his future in "sad characters" and taking a "few risks to prove to people that [he's] serious about [acting]."
to the left is the picture accompanying the interview, and TOTAL FILM JULY is now on newsstands.
Posted by Admin, Niamh, Danaholics Anonymous at 2:11 PM