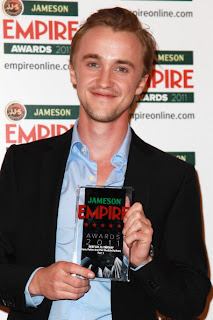 EMPIRE had their awards today and Snitchseeker and the Empire's own website staff were on hand to take down the results and post pictures;

"Best Sci-Fi / Fantasy
Lily Cole is presenting this one, which is appropriate since she has form in the genre (in The Imaginarium of Doctor Parnassus) and because she looks like some sort of magical fairy / particularly attractive alien hybrid, so she pretty much embodies both genres.

AND THE WINNER IS... Harry Potter And The Deathly Hallows, Part One
(Tom "Draco Malfoy" Felton is here to collect this one)

"A huge thank you to all the Empire readers and the fans for a decade of support; we wouldn't be here without you. You must excuse the absence of David Yates; he'd love to be here but he's putting the finishing touches on our epic finale, which is why I'm here. So thanks again, and have a great evening." And expelliarmus! OK, he didn't actually add that.

O Briain adds, "They were going to keep going with Potter and follow him to university, but who can afford £9k per year?"