I know this comes 2 days late, but i was busy counting up scores for Greatest Follower Ever Part Deux, and the results will be released soon!
I didn't get to attend even the red carpet part of the Irish Film and Television Awards unfortunately (although there were plenty of empty seats i saw), but i watched it on tv. Not too fussed though as I've met Evanna Lynch and Brendan Gleeson before although the latter was quite briefly as he was late for the Ootp premiere!
Anyway, The presenter joked that the awards should be renamed 'The Gleesons' as (as the Metro newspaper reports) the three acting Gleesons (Brendan,Domhnall and Brian) were nominated for 5 awards between them. Yet only Domhnall (who plays Bill Weasley in the Harry Potter series and was not present) was sucessful scooping 2 awards; Rising Star and Best Actor in a Tv Series for his work in the docu-drama When Harvey Met Bob, chronicling the efforts of Bob Geldof regarding Band Aid. Domhnall is pictured in the role left. 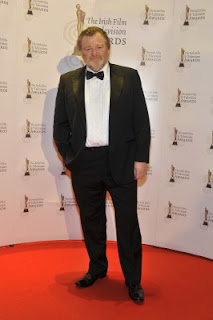 Dad Brendan had to embarrassingly accept the two awards, commenting on the first (Rising Star) saying: "Not sure about rising star. Hard to get him up in the morning".
Brendan also presented theBest Supporting Actress which was awarded to the briliant Saoirse Ronan, best known for her Oscar-nominated role in Atonement.
Other son Brian lost out on his supporting actor in televison award, but to a well-deserving Stephen Rea for his performance in the recently aired on itv irish show; Single-Handed. That said, his performance in the cool gang drama, Love-Hate aside Rupert Grint's Cherrybomb co-star Rob Sheehan, was also good. 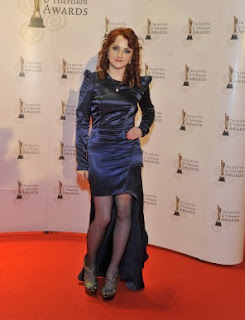 Love-Hate, starring Brian and Rob Sheehan (mentioned above) lost out to the ever-winning The Tudors.

Mo, starring the wonderful Julie Walters was up for Best Single Drama against Domhnall's When Harvey Met Bob, which took the prize,along with Domhnall's other show, Your Bad Self (Best Entertainment) which a snippit of can be seen on our youtube.

Brendan Gleeson's Perrier's Bounty and Domhnall's other nominated (well, he starred in it) film, Sensation nominated for Best Film, an award neither won. Yet i think that was a blessing...Brendan didnt look too happy anyway,imagine if Domhnall's film beat his one...lol. Brendan also lost out his Best Supporting Actor in Film nod to Pierce Brosnan.

I'm glad someone won for the wonderful Love-Hate, as the writer for tv, Stuart Carolyn took the award for the above.The wonderful Rob Sheehan was nominated for that, but was obviously beaten by our own Domhnall Gleeson.Noreen, Brian and Brendan Gleeson's short film was nominated for Best Short Film, but didn't win.

In other Harry Potter actors related to the Ifta's, Helena Bonham-Carter lost out Best International Actress to the stunning Annette Benning for the Kids Are Alright... i think Helena will be alright as she won at the Baftas... report on that to follow.
Posted by Admin, Niamh, Danaholics Anonymous at 7:43 PM