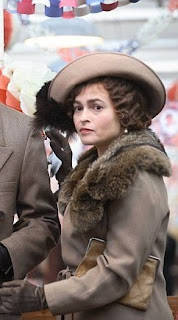 Helena Bonham Carter spoke about Bellatrix Lestrange during an interview about the King's Speech to Click Magazine.
Comparing Bella to the Queen and wife of the King of the film's title, she said;

"Q: QUESTION FOR HELENA, WHEN YOU ARE PLAYING A REAL CHARACTER LIKE THIS, DO YOU DELVE INTO THE RESEARCH OR DO YOU JUST GO BY THE SCRIPT?
...Hugo Vicars wrote an unauthorised biography, I read that. I didn't actually have that long, only about two and a half weeks because I was playing a witch in Harry Potter at the same time.Actually my son who was six at the time said "Mummy do you have to play the witch or the Queen tomorrow?" I said that is a good question, as long as I don't get them mixed up. Having said that, the witch, Bellatrix, is quite exhausing because she is all screamy and a bit of a hooligan so it was quite nice to have the weekends off...the Queen, just being a bit more restrained."